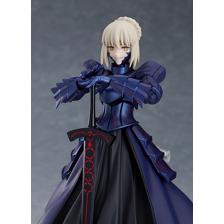 Available Now Fate Series
Due to geographical licensing restrictions this item can only be shipped to following countries: Canada,United States
Add to Wish List

Description
The blackened King of Knights, corrupted by the world's evil.

· The sculpting of the figma has been redone from the ground up to be more awe-inspiring than ever before.
· Drawer joints are used in her shoulders allowing for broader posing options, such as poses with her wielding her sword in both hands.
· A flexible plastic is used for important areas, allowing proportions to be kept without compromising posability.
· The lustrous appearance of her blood-streaked black armor has been faithfully captured, preserving the truly dark atmosphere that surrounds her.
· She comes with three face plates including an expressionless face, a shouting face for combat scenes and a smiling face.
· She comes with Excalibur Morgan as an optional part, along with front hair parts used to display her with her mask on as well as fluttering front hair parts for more posing options.

"It looks good on me? …Not that it matters or anything!"From the popular smartphone game "Fate/Grand..

"I will allow evil, but only evil with purpose."From the popular smartphone game "Fate/Grand Order" ..

"If I became a bad person, would you be able to forgive me?”From "Fate/stay night: Heaven's Feel", t..

"Karna. To think we'd be in the same faction..." From the popular smartphone game "Fate/Grand Order"..

"You laughing at me?"From the popular smartphone game "Fate/Grand Order" comes a Nendoroid of the As..

Available Now Fate Series
Due to geographical licensing restrictions this item can only be shipped to following countries: Canada,United States
Add to Wish List